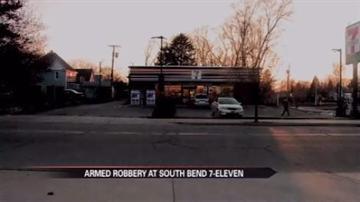 SOUTH BEND, Ind. --  Some residents in a South Bend neighborhood were surprised to learn their 7-Eleven was robbed at gunpoint.

“Yeah, I was shocked, because this is generally a really safe neighborhood,” said Christine Chmielewski.

“Yeah, I was really shocked, because this doesn’t usually happen around here,” said Roosevelt Nelson.

7-Eleven customers  were upset when they heard the store was robbed at gunpoint.

One customer, Craig Jewart was not surprised, he says he has noticed it getting more dangerous on this side of town.

“The house next to mine got shot up a couple weeks ago,” said Jewart.

According to police, two males wearing dark baggy clothing came into the store after midnight.  One watched the door, while the other told the cashier he had a gun and demanded money.  The thieves got away with $25 in cash and then took off on Milton Street.

Christine Chmielewski says she does not think this particular 7-Eleven is a target.

She says she does take precautionary measures when she needs to run errands or pick something up from her local convenience store.

She and Nelson have some tips for folks on how to stay safe no matter where you are.

“Walk with someone and try and stay in lighted areas,” said Nelson.

Police still have not caught the armed robbers.