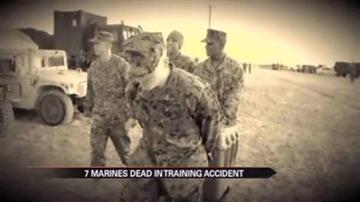 All of the Marines were in a mortar training exercise when the explosion occurred. According to the Associated Press, one of the mortars exploded unexpectedly.

Defense officials confirm it does not appear that the round landed on the troops.

Troops train in the area because of its appearance.

"We look like Iraq. We look like the Middle East and a lot of the training that's been happening here has been because of how we look," said Shelley Hartmann, economic development director.

The area also serves as an ammunition storage and disposal site for the military.

The team was from the 2nd Marine division at Camp Lejeune.