8 cars stolen in one morning 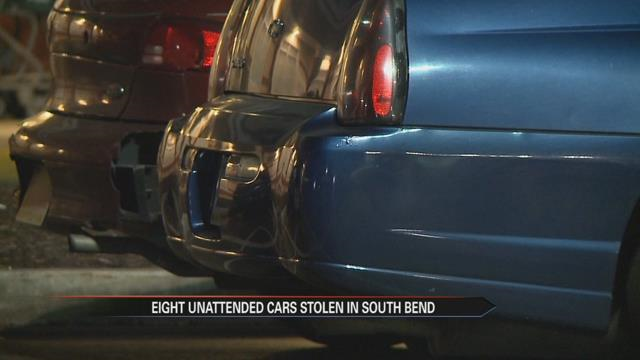 It is that time of year where there is an uptick in car thefts. South Bend Police say it is because people start their cars and leave them running unattended.

No one wants to get in a cold car for the morning commute to work but when it is left alone, it could get snagged.

"People go out and warm the cars up, leave them unattended, finish getting ready for work or doing other things. Somebody takes an opportunity to get in the car and take it," said Captain with the South Bend Police Department Steven Noonan.

He said stolen cars are a crime of opportunity. On December 1st during the time of 7 a.m.- 8 a.m. South Bend Police reported eight cars stolen in different parts of the city.

"It's just people walking along who are looking for this kind of opportunity because they know that people will leave the cars running this time of morning to get the frost off the windows and warm them up before they get in them," Noonan added.

Those stolen cars had one thing in common, they were left running, unattended, and unlocked.

Instead of leaving cars unattended, people should opt to get a remote start on their car.

"The other option is to get a remote start. Most of our squad cars are becoming equipped with remote starts through the manufacturer," he said.

Of those eight cars stolen, a couple have been recovered with little to no damage.

"In a lot of cases there isn't damage. We find them abandoned somewhere. It's just that someone took it for a joy ride or some took it simply for transportation to get from point A to point B," Noonan said.