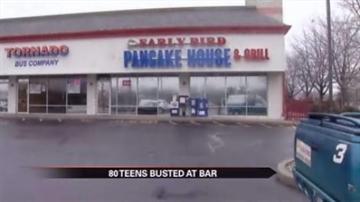 INDIANAPOLIS -- Eighty Indiana teens are in hot water after police caught them partying at an Indianapolis bar.

The teens were busted by the police Sunday at the Early Bird Bar and Grill.

Some of those teens were as young as 13-years-old.

Police were tipped off when they came across a flyer for a 13-year-old's birthday party at a bar.

The bar owner did not learn about the party until the next morning from customers.

Police are now recommending the bar have its liquor license revoked.