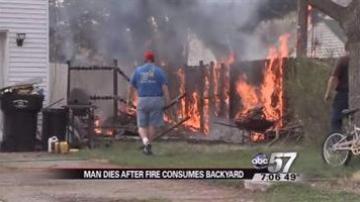 An 81-year-old man has died after a fire consumed his backyard.

Investigators said Arnold Schutts was burning a pile of debris near his wooden fence when it for out of control.

Once the fence was completely engulfed in flames, the fire crept closer to the house.

When firefighters arrived on the scene, it took them quite some time to pit the fire out.

Schutts was sent to Fort Wayne with life threatening burns, which ultimately took his life.