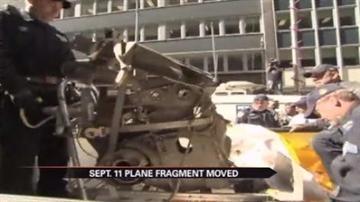 NEW YORK CITY -- The 9/11 plane wreckage found near a New York City building has been moved nearly a week after it was found.

Crews had to use a pulley to move the 5-foot, 225 pound part from an alley near the World Trade Center.

It was found wedged between two buildings last week making it hard to move.

"It's a piece of history. We tried to preserve it as best we could. Tried not to cut it or change it in any fashion so we could get it out in the same way we discovered it," said New York Police Department Deputy Chief William Aubry.

The part has been moved to an NYPD facility in Brooklyn.

The medical examiner's office also checked the area for human remains. None were found.