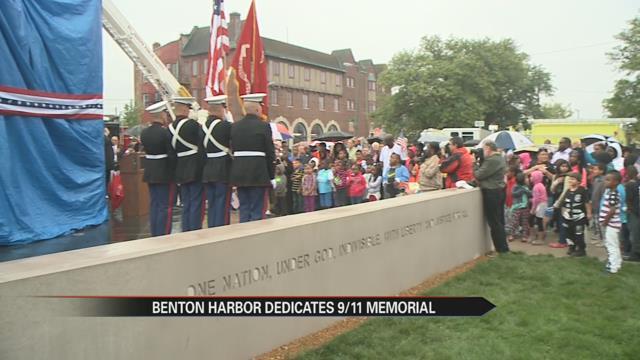 Friday morning, the Project Resiliency dedicated the 9/11 Resiliency Plaza and the 500 pound steel beam from the World Trade Center rubble.

“When they found the officer, they found his badge. They know his name. This is his name and this is his wife. I didn’t know what to say. I told her how proud we are. That he gave his life for the rest of us," McKee said.

On this anniversary, this 500 pound beam was placed proudly as a symbol of resilience for public servants like McKee and the rest of the community.

‘When we would find human remains and it was a policeman or a fireman we would do a short mini funeral service before they would remove the remains to the morgue," McKee said.

Some of the children are too young to remember or understand what happened in 2001.

“People will be able to come from all over Berrien County, from all over the United States to come pay their respects here," said Steve Johnson, Benton Harbor Department of Public Safety Fire Marshal.

The artifact was placed in the plaza under the inscription 'One nation under God, indivisible, with liberty and justice for all.'