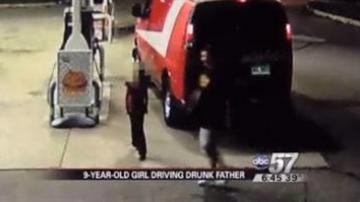 DETROIT, Mich. -- Police say a 9-year-old got behind the wheel because her dad was too drunk to drive.

A Michigan man is now facing felony charges after police say he had his daughter drive his van while he was allegedly drunk in the passenger seat.

A witness spotted the pair, and started following them. That driver called 911, and followed the van, until the cops showed up. Officers found the girl sitting on a booster seat behind the wheel. Her 39-year-old father refused to take a breathalyzer test.

He's been charged with child abuse, and is a habitual offender. He's free this morning on a $25,000 bond.