911 calls released from I-94 pile up, MSP investigating 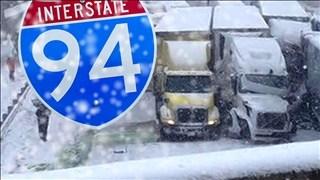 The crash on Interstate 94 in Michigan last week had nearly 200 cars involved, killed one person, and injured dozens others.

According to MDOT, drivers were traveling too quickly on the snow-covered road, and drivers did not leave enough space between vehicles.

911 calls for the crash have also been released by officials.

Michigan State Police are in the beginning stages of their investigation, and they are asking those with picture or video to contact them.