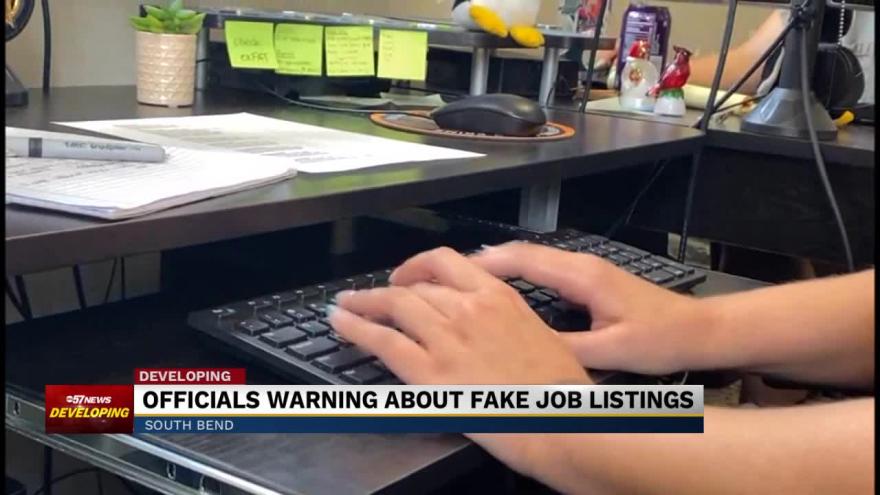 SOUTH BEND, Ind.-- From advertisements, to job posts, fake listings may seem like an easy thing to point out, but according to the FBI, online fraud takes millions of dollars each year from victims. And it’s certainly not an easy task to put an end to it.

“There are a lot of inaccurate and fake types of postings online that scammers use to try and illicit information from people,” St. Joseph County Cyber Crime Unit Director Mike Kajzer said. “This is a very under reported type of crime. Most internet frauds are very under reported, that’s part of the reason why it keeps happening, it’s very low risk for the scammers to participate in this that even if they’re found out to be a scammer a lot of times, they’re not held accountable for it,”

The South Bend International Airport just days ago became bait for a fake job listing. A post circulating on Facebook, offering up 2,000 to 3,000 dollars a week as an air shuttle driver which drew in tons of interest from potential applicants. T

The airport issuing a statement on social media saying the position isn’t affiliated with them, and tells ABC57, “all employment opportunities with the St. Joseph County Airport Authority are listed on our website...The airport will never request personal information from job applicants via social media.”

Kajzer said unfortunately these things happen often, and it's hard for businesses to combat it.

“The first thing the company would have to know is that there was that fraudulent posting out there under their name or being put out on their behalf. And the only way someone would know that is if someone reported it to the company,” Kajzer said.

Kajzer says to avoid becoming a victim yourself, it’s important to take note of all of the red flags.

“You know you hear it all the time, if it’s too good to be true it probably is,” Kajzer said. “Defiantly double check. I would always go back to, if it’s a position you're interested in, regardless of where you saw it from, go back to the actual company website of that business and look for the position. If they don’t have positions posted, or if that specific position is posted, contact them. Call, give them a call, send them an email with the contact information on it and ask them about it.”

To report a cyber incident, you can click here.