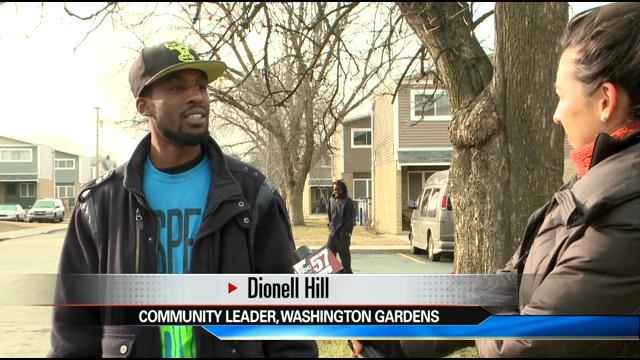 The first thing many folks want to do in Elkhart for 2015 is take a stand against violence. The community is saying enough is enough.

Residents believe one of the worst areas for violence is the Washington Gardens Apartments. A 16-year-old boy was recently shot and killed and a few months before that a man died in a shootout with police.

Now Dionell Hill, an anti-violence activist in the Washington Gardens Apartments is calling for his community to take action.

“Nothing's working. Don't you see that nothing is working, so what you have to do now is stand up and take action,” says Hill.

Hill is tired of seeing the violence in his neighborhood. He believes it escalates year after year.

“If you look back to the past two years and you hear about the reports, the police, and how many times the police have come out here because of the gun violence; you know right here in the Washington Gardens you know it is where a majority of the violence happens," said Hill.

Hill doesn't want a repeat of the shooting death of 16-year-old Ontario Brown.

“We want to do this because we want our kids to have a future,” says Hill.

In order to make changes occur in his neighborhood, Hill says he has a big move for 2015.

“That is why we are here today to sit up here and say we will not continue the violence and we will start working with the police,” says Hill.

Hill explains how in his neighborhood, there can be negative consequences for giving information to police. In 2015 he wants the community to know that it's time to stop living in fear.

“We are not afraid to say that we are going to work with the police because of the things that are going on because we are feeling threatened for your lives because we are being labeled as snitches,” said Hill.

This type of transparency between the community and law enforcement is exactly what Sergeant Chris Snyder of the Elkhart Police Department is hoping for in the New Year.

“There are 123 police officers here but there are 60,000 citizens that are out there and they are obviously going to be able to see and hear more than we can. So we rely a lot upon them to help us and give us information when it comes to any investigation,” says Snyder.
Share this article: