A day after fatal explosion, silo catches fire at co-op 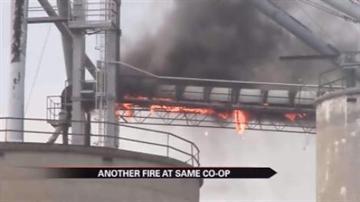 UNION MILLS, Ind. – The day after an explosion killed a worker at the Union Mills co-op, a fire broke out in a silo.

Co-Alliance and investigators are still trying to determine the cause of the explosion that killed 67-year-old James Swank, they believe it was a grain dust explosion at the top of the grain elevator.

“We are currently in the process of doing some investigating with ATF and OSHA,” said Co-Alliance safety and risk manager Shawn Lambert.

"You do the best you can do get grain dust down but air mixed with it and a flammable source, it can happen anywhere,” said Mochel.

Lambert said the mood was somber at work Tuesday.

“It is a very somber mood. It is the loss of a coworker not just a coworker but a family member,” said Lambert.

He had grief counselors in to help the employees deal with this tragedy.

“Common although we don’t hear about it that often—every time it happens someone is badly injured or killed,” said Mochel.