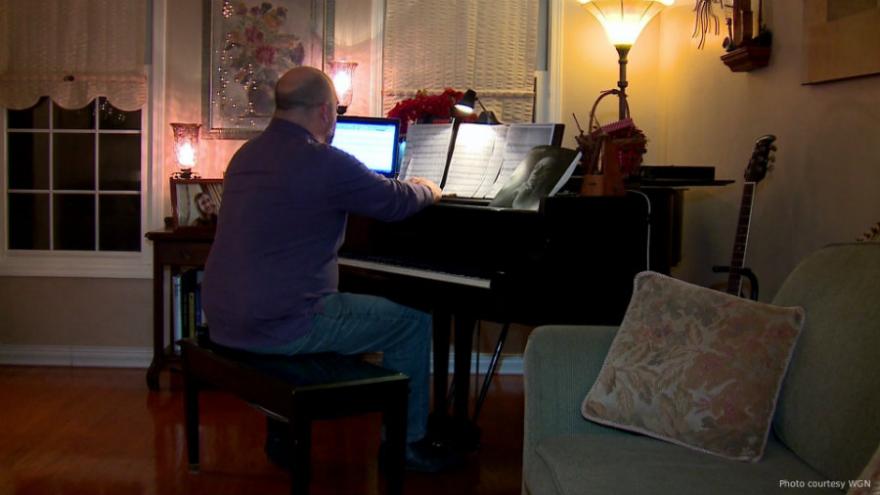 Chicago, Illinois (WGN) -- A child losing a parent is an indescribable pain. The hurt gets pushed down, but never fully goes away. Even with time it can unexpectedly creep to the surface-especially during the holidays.

What if your parent, before they died, left something precious behind?

A South Side sister and brother, now senior citizens, had their dreams come true this Christmas after saying goodbye to their father decades ago. They found a hidden treasure and were given a priceless gift after more than 70 years.

Pat McMahon and Bill Merker are Chicagoans who along with their older sister Mickey painfully bid farewell to their father long before they were ready. Pat was 10. Bill was just 6 at the time, when William T. Merker, his namesake, died from tuberculosis. He has only three memories of his father. First, his parents 20th wedding anniversary. Then visiting his father at the Edward Tuberculosis Sanitarium in Naperville.

“At some point they wheeled a frail looking gentleman to the window and my mom said, ‘That’s your dad,’” he says. “She just said, ‘Go wave.’ We waved to him and he waved back and that was the last time I saw him alive.”

“Final thing I remember is the funeral,” he says.

For those young children and the rest of the Merker family, life forced them to move forward.

“I think everyone who has parents involved in their lives, when that time comes, it’s tough,” Bill says.

Decades later, in 2014, their older sister Mickey died suddenly. Together, cleaning out her house, they found a brown envelope containing music - pages and pages of sheet music penned by his father.

Their father was a blue collar rubber stamp maker who played piano on the side. The music was from 73 years ago. Neither Bill nor his sister Pat were even alive back then.

“I was told by relatives that he wrote songs,” Bill said.

“It means something because it’s a part of him we didn’t know about,” Pat says.

“In going through the envelope and folder, there appears to be three songs. And with each of those songs was a rejection letter,” Bill says. “In the late 30s, early 40s it was all Big Band. This was a song with 20 instruments behind it. And I just think that would be so cool to be able to hear these three songs. We’d like to see if there’s a way for it to be brought alive.”

Pat and Bill say neither can read music and had no idea how to go about getting it scored.

So WGN News quietly reached out to another South Sider, Vince Clark, a trombonist and vocalist for Outcast Jazz Band. He agreed to bring this sheet music to life.

He took a look at it and added a few notes along the way.

“Hopefully when we’re all said and done here, we’ll have maybe a three to four minutes song that we can play for them,” he said.

Weeks later, WGN News invited Bill and Pat to a show in Elmhurst. They didn’t ask many questions. We didn’t give them much information, only a reserved table close to the dance floor.

Then the Outkast Jazz Band delivered a song Bill and Pat could only dream of hearing one day.

Holding back tears, this brother and sister suddenly got a window into their father’s life after a door had been shut on them 61 years ago.

“It was amazing,” Bill said after the performance. “I had no idea it was as good as it was.”

“I didn’t know he was that creative,” Pat said. “We were little when he died, we didn’t know any of this. It was emotional, very emotional.”

Vince never a hesitation in taking on such a difficult project. This was a gift from a perfect stranger who was also motivated by the fact that he’s a musician and a father himself.

“I thought to myself, someday I hope the stuff that I’ve written down maybe my kids will discover it, my grandkids will discover it, will take it out, play it and see what was in my head,” he says. “For me it was just sort of nice thing to do for the holidays. Our keyboard player shot me an email and said, ‘Oh, Vince earned his wings.’”