A look back on the Manti Te'o tragedies 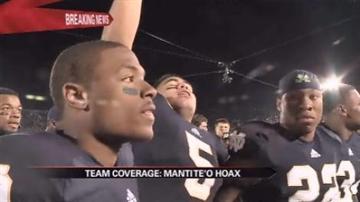 "Leis for Manti" became a national and international sign of pride for the Fighting Irish. When the news of Manti Te'o's tragic loss broke, the Notre Dame team and community united to support their star linebacker.

"One day she made me promise that, she said, "Babe, if anything happens to me, you promise that you'll still stay over there and that you'll play and that you'll honor me through the way you play, and know that I would rather have you there," said Te'o in a press conference shortly after his alleged girlfriend's funeral. "And just make sure that all she wanted was some white roses. White is her favorite color. So she just wanted some white roses and that's all she asked for. So I sent her roses and sent her two picks (interceptions) along with that, so that was good."

It was a heartbreaking story that changed a team.

"There's a lot more to that statement in that all those kids in there were pulling for Manti," said Notre Dame head coach Brian Kelly following the Michigan State game in September 2012.

"Ever since [Manti Te'o] told me and we found out, I was there for him as was our whole team and we just kept his head up and just try and keep him as positive as we could and when he came out he played tremednous," said Irish running back Cierre Wood following the Michigan State game.

Just days after news broke that Te'o's grandmother and alleged girlfriend died, Te'o posted 12 tackles, a fumble return and two pass breakups against Michigan State at Spartan Stadium. It was a game that was all but perfect for Te'o.

"Yeah, I could call my girlfriend right now and tell her about the game, but I just know I can get on my knees and say a prayer and i can talk to her that way," said Te'o following the Michigan State game.

Te'o's strength through adversity carried through to the following week, rallying not just his teammates, but an entire nation- ND nation to be precise.

Tens of thousands of Irish fans donned Hawaiian leis for Notre Dame's game against Michigan-- uniting a community to the bitter end.

"The season, the year here, my career here-- I've been truly blessed to be at Notre Dame and I'll forever be proud to say that i'm a Notre Dame Fighting Irish," said Te'o following the loss at the BCS National Championship game on January 7.

This season was far from the fairytale ending any Irish fan wanted, but the story is not over. Te'o is still expected to speak on the hoax.