A new Mayor's Arts Council in Goshen is looking for ideas 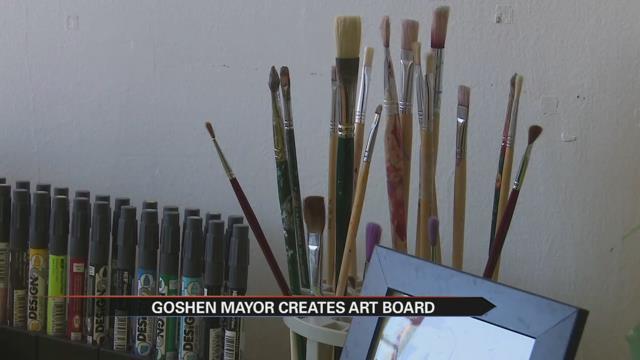 Local artists in Goshen say the city is changing. One man who moved back to Michiana says a new arts council will really help his business.

The money will be used to improve the Goshen theater and it will help support an art scene that one entrepreneur says has helped him a lot.

“I reluctantly moved back after we started having kids but I’ve done a 180 I have found Goshen to be a place, very supportive or entrepreneurship and the arts,” says Rafael Barahona, who owns R3 Design.

R3 Design is a print and web design company started by Barahona three years ago.

“I’ve been able to create a lot of relationships and networking so that has helped,” says Barahona.

Rafael says Goshen has been a great place to grow his client base both locally and nationally.

Now he’s part of the new Mayor’s Arts Council that started in September.

Barahona hopes the council creates more initiatives that will benefit him as an artist and as a Goshen community member.

“We want to give artist a chance to network and share resources share spaces perhaps and also so the community can realize all the things that are happening,” says Carrie Lee Bland Kendall another member of Goshen’s Mayor’s Arts Council

Bland Kendall is also on the council and explains that the group is looking for input on how to spend $100,000 thousand dollars to take the art scene to the next level.

“The fact that we get to be involved in helping shape that and the future and make sure that the arts are sustainable for the next generation and on,” says Bland Kendall.

Over the next two years the rest will be up to the Mayor’s Arts Council to find out what’s next.

Barahona hopes it will help others see this small city like he does.

“Moving back here, I think initially I had my reservations, but I have been so fortunate I think to land in a place that has been so supportive and encouraging of the arts,” says Barahona.

For my information on how to become more involved in the Mayor’s Arts Council like their Facebook page Mayor's Arts Council.