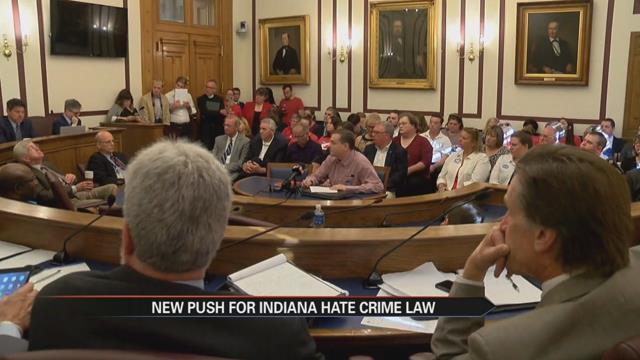 There’s renewed hope for a bias crime bill in Indiana.

The mother of Jodie Henderson, a slain South Bend resident is pleading for lawmakers to recognize hate crimes this legislative session.

Police say he was killed back January for his sexual orientation, so his family wants to make sure it doesn’t happen again.

The fight continues downstate as Jodie’s family is hoping lawmakers will take a stand.

“I just want the lawmakers to know and the legislators and senators to know that we need a law passed here in the state of Indiana,” said Forrest.

A bias crime bill failed to make it to the senate floor last legislative session.

But this time around a new author is looking at a new push.

“We find ourselves in a position where we’re one of five states that doesn’t have a statute to protect people from being discriminated against or their property being damaged based on who they are,” said Greg Taylor, state senator.

A study committee met Tuesday at the statehouse to hear testimony as to why this law and other pro-LGBT laws are needed.

Forrest hopes that session will lead to a change of hearts.

“This is not only for my son, this is for anybody,” she said.