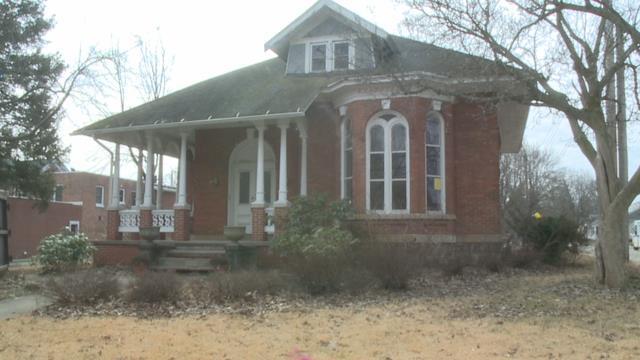 It is out with the old and in with the new for a couple in Buchanan commonly called "a Project Couple."

They take old homes and breathe new life into them and they've got a new project on their hands.

Trent and Leah Runyon purchased the Pears home on Front Street in Buchanan back at the beginning of February. They fell in love with the home as soon as they walked inside.

“The arches, the windows, the doors, the high ceiling, the brick. We love character and this home has tons of it," said Leah Hudson Runyon.

It is believed the home was built around 1865. “We know that there was a fire in the 1920’s that took out the second floor,” said Trent Runyon.

“We’ve absolutely loved the process of it. We love the tearing apart and getting to see everything down to the bones. We love the rebuilding and kind of breathing new life to it,” she added.

This is not the couples first home either. They have renovated other homes but this one is their largest project in terms of square feet. The Pears home is believed to be between 3,000-4,000 square feet.

For the couple, taking old homes and breathing new life into them serves as a bonding experience.

“We seem to get along very well. You’ll hear a lot of people say if you want to test your marriage then do a home project but that really isn’t the case for us. We really get along because our tastes are very similar,” said Trent.

The floor plans for the home are still in pencil but the couple wants to have three bedrooms and three bathrooms as well as a large kitchen.