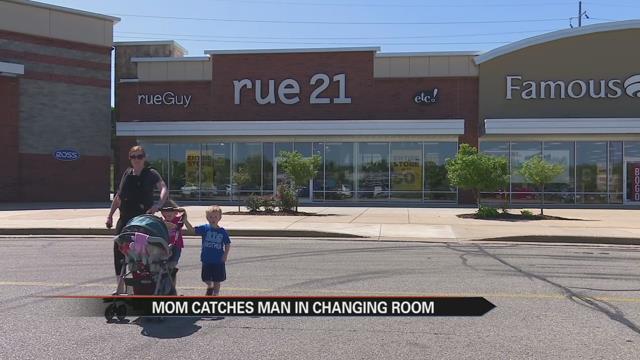 A weekend shopping trip turned into a sick and scary situation for one Michiana mom. She says a man was performing a sex act in the changing room right next to her daughter.

The incident is said to have happened at Rue21 in Erskine Village. The mom says she called police but a report was not filed.

Management at Rue21 says they cleaned up the mess and now want to move on, but the mom says the community deserves to know what happened.

“My instinct was to get my daughter out of there I was afraid,” says the mom who did not want to show her face on camera.

She says on Saturday she was shopping with her 13-year-old daughter and was waiting outside the fitting room.

“There was a man just standing there with his pants pulled completely down to the floor. There was just absolutely nothing left to the imagination it was literally obvious,” says the mom

She says the man’s shadow was so defined she could see his every move and knew what the man was doing.

Rue21 employees at Erskine Village say the incident did happen but say they did not call police since it is against company policy to prosecute customers.

ABC57 called Rue21 corporate to see if they agreed with the decision to not call the police. The customer service line disconnected all of our calls.

“Obviously they are not concerned about the safety of not just their customers but their employees,” says the mom.

The mom says she called police who told her they would have to see if they receive other similar complaints before filing at report.

On Monday she is taking matters into her own hands and warning the community.

“When you see someone doing something like this so easily in public it is a sick scary feeling,” says the Michiana Mom.