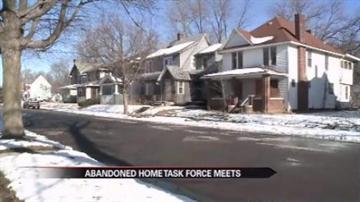 SOUTH BEND, Ind. -- South Bend’s Vacant and Abandoned Homes Task Force met Wednesday to discuss the final draft of their recommendations. Homeowners in neighborhoods with a lot of abandoned homes hope it helps.

Last year, Mayor Pete Buttigieg formed the task force to figure out how to deal with the issue.

John Charles Bryant has lived in his home on Harrison Street since 1943.

"It used to be a very nice street. The neighborhood just started changing after people started renting houses; you know but change is inevitable, growth is optional,” said Bryant.

This neighborhood opted not to grow. In fact, over the last few years more and more people have moved out.

"I think that there are 13 or 14 houses that are empty from Lincoln Way up near to Portage,” said Bryant.

With no one around to care for them the homes have fallen into disrepair.

"It's depressing; but they are always trying to revitalize neighborhoods and hopefully this neighborhood will be revitalized at some point,” said Bryant.

But progress is slow and the mayor's task force is way behind schedule on releasing their recommendations.

Bryant will take anything at this point.

"I don't know what the answer is. I've stuck it out pretty much as long as I can and I am trying to hold in there. But I don't know how much longer I'll be able to hold on,” said Bryant.

The task force is expecting to finally release their recommendations soon.

Bryant says he is the last of his line and with no heir to pass the home down to he will likely donate it.