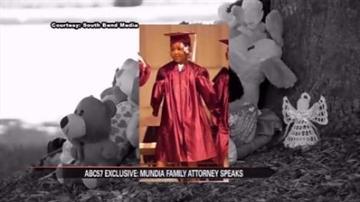 SOUTH BEND — Shirley Mundia, the 6-year-old South Bend girl who police say was murdered by her father, will be laid to rest on Monday after an unexpected delay in burial plans. According to the Mundia family's attorney, Shirley's mom Lucy was handed a lawsuit the minute she stepped off the airplane in Kenya to bury her daughter.

"I almost couldn't believe it," said Elton Johnson, the attorney for the Mundia family. "I almost thought it wasn't a sick joke."

Johnson explained it wasn't a joke. The family of Edward Mwaura, the man who allegedly stabbed Shirley to death, put an injunction in place that stopped Shirley's funeral and burial.

Johnson said the reason for the injunction was shocking.

"The family also alleged or believed that Lucy had something to do with the death," said Johnson. "Maybe she poisoned him or did something to him that made him delirious and therefore he committed this act. There were some bold accusations that were unfounded and unwarranted."

Friday, a judge in Kenya announced that the court supported Shirley's burial.

"Although they held up the process a little longer, they are going to be able to bury Shirley Monday. And that's what they wanted," explained Johnson.

Despite the added stress of the lawsuit, Johnson reports that Lucy is staying strong.

"Lucy is doing well," said Johnson. "She has a lot of support. It's going to take some time for her to get over this, naturally, of course, but overall she is doing okay. She is strong."

Johnson also said that the family has been overwhelmed by the support the community has showed them during this time.

Donations to help Shirley's family are still being accepted at Shirley-Mundia.com.