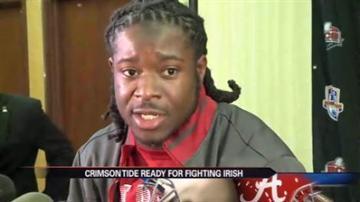 MIAMI, Fla. -- Notre Dame will have its hands full with Alabama, the reigning national champs. Alabama held its first practice since arriving in Florida. Alabama players say they know the only thing standing in their way from getting back to back championships is the best defensive unit in the nation.

There's no question Alabama has the experience playing in a national championship, but when talking to the Tide's play-makers, they say they know Notre dame Has a lot to offer on the other side of the ball.

"Each game has its own story its own atmosphere and its own feeling. This is just like the first game for me,” said Chance Warmack.

If you ask the Tide, there's one big problem with facing Notre Dame.

"They're just really disciplined in what they do,” said Warmack.

Even though most of the Alabama offense has put their sweat into a national championship practice before, they've got a freshman standout in Amir Cooper. He leads the team with 53 receptions and 9 touchdowns.

"He's playing like he was a four year starter but just a freshman, he comes out and makes the explosive plays,” said Lacy of Amari.

Alabama has a 6’2” 255 pound linebacker standing in their way.

"He's the heart of the defense. He's going to come out give it 110 percent on every down,” said Lacy of Notre Dame’s Manti Te’o.

“On Te'o you turn on the film and he's all over. I think what stands out the most is his passion,” said Barrett Jones, Alabama center.

The passion runs strong for both off these teams and what's at stake is even larger.

"If we don't win this game I don't think our legacy will be what it could have been,” said Jones.