ABC57 in Miami: Golson: From rookie to leader 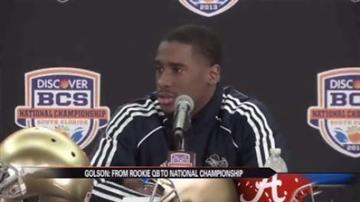 MIAMI -- Looking back on the 2012 season, it's hard to imagine that there was no definitive starting quarterback a week before the first game. Now, after five months, 12 games, no losses and a national championship title on the line, Everett Golson has gone from rookie to leader.

From first time starter to national championship contender, sophomore Everett Golson has seen his fair share of ups and downs this season.

“The thing for us with Everett is our confidence never wavered in anything he was going to become. We were just pushing the envelope to how quickly we could get him to the level we knew he could play,” said Chuck Martin, Irish Offensive Coordinator.

According to his teammates, that moment was Oklahoma.

"He knew. He had this unbelievable confidence in terms of his passing ability and you know with that game I think we answered a lot of questions with him,” said Theo Riddick, Irish running back.

Golson threw for 177 yards against the Sooners and completed 13 of 25 passes including three third down conversions, stats good enough to boost any QB's confidence.

But will that translate to a stage like the national championship?

"I would hope so. But let’s be real, I mean it's the national championship. Anything that happens, good or bad, you're going to get rattled somewhat with all the hype around the game just with the month you've had off and the jitters of back to play,” said TJ Jones, Irish wide receiver.

The hype and pressure certainly aren't lost on Golson. But he's keeping his attention on the field.

"I'm just kind of focused on what's played between the yard lines, what's played on the field. Can’t really focus on everything that's off the field because that's out of my control,” said Golson.

Although Golson's teammates say Oklahoma was his breakout game, Golson says he felt the Miami game was truly his turning point this season.