ABC57 Investigates: Are you getting what you paid for at the pump?

ABC57 Investigates: Are you getting what you paid for at the pump?

MISHAWAKA, Ind. -- You may be in for a little sticker shock if you're planning to jump behind the wheel this Memorial Day weekend. Thanks to the rising cost of crude oil AAA says, summer gas prices are expected to be the highest they've been in four years. If that wasn't bad enough, we found dozens of local gas pumps that aren't giving you what you paid for.

You may have seen one of these weights and measures stickers while pumping gas. It means the pump has passed an inspection and is pumping as it should be, but these inspections only come once a year. So what about the other 364 days? 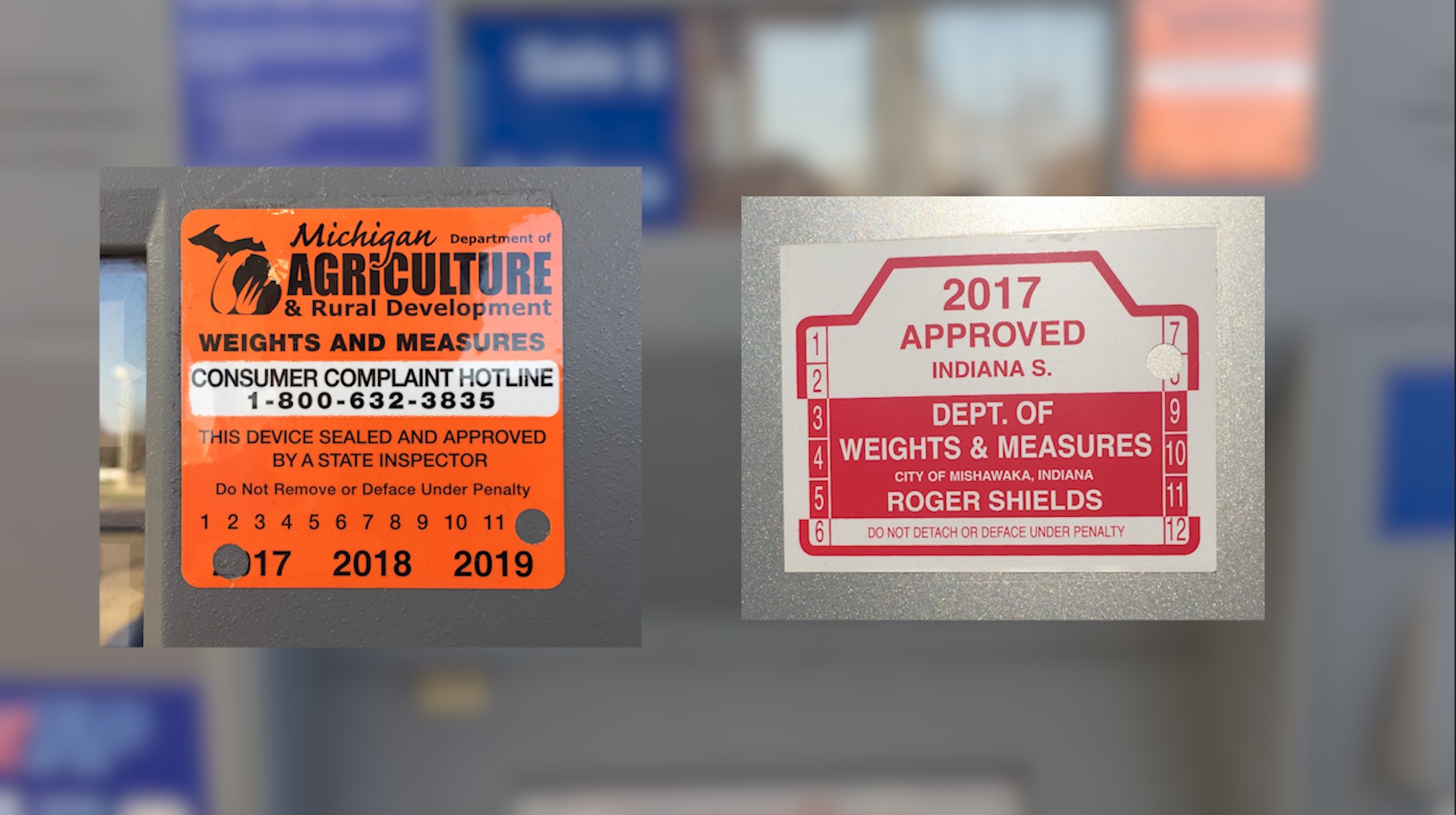 ABC57 tagged along with inspectors to find out how they are keeping the pumps honest and how you can too.

For Roger Shields the ripping off of a sticker means another year has come and gone. He's once again beginning his yearly inspections on all of Mishawaka's commercial gas pumps. Roger has been the weights and measures inspector for Mishawaka for several years.

"We check for leaks and make sure all these valves that there's no hose leaks," said Roger.

Most importantly he checks to make sure you're getting what you pay for.

"Station owners today want to get everything tested and keep it correct," Roger added.

He uses special tanks to measure out five gallons of gas -- making sure it matches what the pump says.

"They have to be plus or minus six cubic inches to pass or fail," said Roger.

If they are outside that range the pump is rejected and must be serviced and recalibrated.

ABC57 obtained copies for every gas pump inspection in Michiana for 2017. We spent hours going through the numbers.

More than 3,000 gas pumps were inspected in 2017 -- of those only 19 were rejected for pumping out less fuel than what you paid for.

The worst was the Good to Go Station on US 35 in Winamac. Seven of the pumps were pumping well under the allowed amounts. One was under 20 cubic inches. In a 10 gallon tank at $3.00 a gallon that can end up costing you about 50 cents. The pumps were fixed, re-inspected and approved.

"As the pumps run continuously day after day when they do wear they actually start giving fuel away," said Roger.

86 gas pumps were rejected in 2017 for pumping over the tolerable limits -- giving you more gas than you actually paid for.

The inspection reports also noted 65 gas pumps were hit with various violations. Most of them were leaky hoses and broken screens, but some of the violations can hit you in the wallet.

When pumping gas on those really hot or cold Michiana days you may be like most people and start the pump and jump back in the car. Inspectors say if you don't keep your eye on the meter, it could end up costing you.

Pump jump is when the meter jumps ahead before you've even pumped a drop.

Meter creep is when the meter keeps going after the pump has stopped.

According to inspection reports, only three Michiana pumps were found to be pump jumping and two were meter creeping.

The Meijer on Red Arrow Highway in Stevensville did both.

The defective pumps were tagged, repaired and re-inspected before they were allowed to pump fuel again.

If you do notice a problem when pumping inspectors encourage you to give them a call, but it's important you remember a few things: Which pump you used,  which blend you chose, the price per gallon, the exact total you paid and most importantly a copy of your receipt.

That information can help keep the pumps honest until inspectors like Roger come back next year to test them all again.

To report pump problems in Indiana call your local weights and measures inspector. You can find a list of each county inspector here.

You can find results for all 2017 gas pump inspections by using the interactive map below. (Note: Michigan pumps are tested at random and not on a yearly basis -- so some gas stations may not appear.)