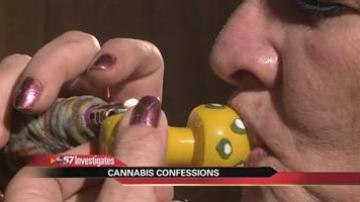 How far would you go to get relief for a medical condition? Would you risk jail time, court costs and fines?

In her kitchen, she showed us the marijuana leaves, cannabis oil pills and even bags of bud that she uses to treat herself for chronic pain.

“I was diagnosed with fibromyalgia thirty years ago,” she said.

She said this illegal drug use gave her a second lease on an otherwise dismal future. Before she started using cannabis oil last year, she says she was couch bound and had people wait on her hand and foot.

She heard about the healing effects of cannabis oil from a friend and after she tried it, she said she noticed a difference within just a few weeks.

“The next day I walked out to the mailbox, the next day I was in the supermarket with a shopping cart. And this is all just miraculous. We are talking about the first couple of days of a little bit of oil I could not believe it,” she said.

But her treatment is taboo, the bud is banned and the leaf is illegal. Technically this Indiana grandmother is a criminal.

“I think I was the first person to say marijuana in the state house,” Tallian said.

That was three years ago.

Tallian has been working to change and loosen marijuana laws in Indiana ever since.

Tallian said, “I look at it this way, there’s a whole industry out there that’s in place and working and we’re not regulating it or taxing it and we should be doing both.”

But for the third time in 2014, her bill to decriminalize cannabis and make it legal for research died in the Senate Committee Hearing. Tallian believes politics is ultimately overpowering progress in Indiana.

“I think there is this feeling that anybody who votes for this could get challenged in the elections,” Tallian said.

But a map of the United States shows a major shift happening nationwide on this topic. Twenty states approved cannabis for medical use, two for recreational use and 13 more states currently have marijuana laws pending.

Next year Tallian could put Indiana in that mix. She was considering proposing a medical marijuana bill for the first time in state history.

“I think next session I might propose three bills: one for research, one for decriminalization and one for medical and say pick one,” Tallian said.

Meanwhile, the 57 year old grandmother who is going to great lengths to get a hold of marijuana and cannabis believes the generation of people who judge marijuana use are dying off.

“It’s tough. I think this will be one of the last states to go green.”

She said she's not pushing for this just to get high.

She says she will wait for the day she can light up without fear of losing it all; her medicine, her family and her freedom.