ABC57 investigates: Crime through the eyes of a judge 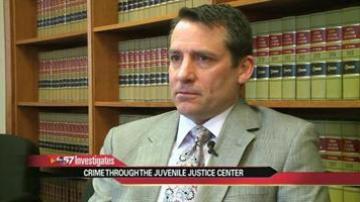 SOUTH BEND, Ind. -- With all of the recent violence in South Bend, we spoke to a local judge about the youth violence problem. We also went behind the scenes at the Juvenile Justice Center.

Probate Court Judge James N. Fox has been on the job for a little more than a year.

Born and raised in St. Joseph County, he has seen youth violence and mental health evolve into what it is today.

"The community health center left, they closed up their doors and walked away. It was a pretty large center and that's where all the services for children went through.

"We're exactly where we expect to be," said Fox.

He says poor parenting is also leading to youth violence in south bend.

In the courtroom, Judge Fox sees and hears a lot.

He sees many parents that are disengaged. Some even show up high to their child's hearings.

He hears teenagers admitting they don't have a family at all and turning to gang activity.

"If you look at some of these people, I think that becomes their family. So they are perhaps in a place where they don't have much other family and they bond with those people," said Fox.

With 30 shootings so far in South Bend this year, is there a quick fix?

"The quick fix is caring and trying to make some connection with these kids that is a lasting connection," said Fox.

That connection is often made behind the doors of the St. Joseph County Juvenile Justice Center.

"When things are happening in the community, they walk in our door one way or another," said Peter Morgan, the Executive Director of the St. Joseph County Juvenile Justice Center.

So many young people have walked through the doors they're running out of space.

Sometimes they're over capacity.

"We've got space to deal with a little over capacity. It's unusually high. Our daily population is 56, which is still fairly high in terms of number of kids detained," said Morgan.

Eighty percent of those detained are boys. They range from as young as ten up to 18 years old.

Most will check in there again.

Those emotions play out in the classrooms.

The kids live in tight spaces. They must earn the privilege to speak, play basketball outside and use a phone.

Strict rules in hopes of getting the kids back on the right track.

"We have to respect these kids enough to hold them responsible at a certain level. It is not simple or effective to write a kid off and say you're solely to blame and we're going to put you away period," said Morgan.

Morgan and Fox both said violent crime numbers are down in the city.

They admit there is an issue with young people turning on each other and arming themselves with guns.

Both say it will take open communication through all city agencies to make a difference and for a long term solution to be possible.