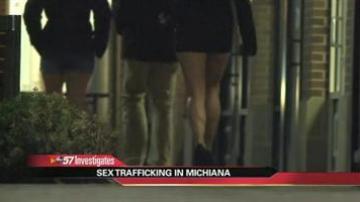 Sex trafficking is a $32 billion industry and it's happening in Michiana. One local woman was forced into prostitution by a family member and escaped after a few years. The state has a task force designated to end sex trafficking.

A life Susan never dreamed she would live to see after years of sexual abuse.

Susan was a victim of the multibillion dollar industry of human sex trafficking.

"I was really afraid that I was going to end up dead," said Susan.

Susan grew up in a dysfunctional household and ran away when she was 17-years-old.

A relative took her in and quickly became her pimp.

"He started with blackmail, and coercion, and manipulation," said Susan.

He told her she was beautiful, and that he would make her a model.

He told her without him, she would have no one to take care of her.

So she decided to take him up on his offer, excited for her first photo shoot.

"When I got in the door I soon realized this was a bigger situation than photography," said Susan.

That bigger situation was sex.

For the next three years she slept with men for money she never saw.

We asked how many men she thinks she slept with during those years.

"I've thought about that and I estimate it was somewhere in the ballpark of about 2,000," said Susan.

To most people, it seems unimaginable.

But Indiana Attorney General Greg Zoeller says human sex trafficking is growing -and it's happening right here in our own backyard.

"It's a bigger problem than people recognize and it's going to take a lot of people to address the issues involved," said Zoeller.

An estimated 1,200 children in northern Indiana are being sex trafficked right now.

Federal and state governments have teamed up to create IPATH - Indiana Protection for Abused and Trafficked Humans task force.

The task force is cracking down on internet sites like Backpage where they say trafficked victims are often disguised as escorts and strippers in the adult services section.

The task force arrested 68 people for their role in sex trafficking at the 2012 Super Bowl in Indianapolis.

"You can track right up to the Super Bowl. The number of messages that were left on Backpage quadrupled," said Zoeller.

Now IPATH is preparing for the PGA Tour being held in Michiana at the end of the month.

What happens to victims after they escape or their traffickers are brought to justice?

With few professional skills and little self esteem, Susan became a prostitute after she escaped.

"What ended up happening is that I ended up getting caught. I ended up in jail and I had a baby at the time who was about four months old," said Susan.

She was forced to give that baby boy up for adoption.

It has been 27-years since all of the happened and she has healed. Susan even wrote a book "To Be Seen and Not Heard" that details her account of child abuse.

"I've become bold and brave in telling my story but it still becomes lonely at times. That scar is with me forever," said Susan.

Susan learned her stepfather made close to $100,000 pimping her out.

She says he has since passed away, but never once apologized for the years of sexual abuse.

Now Susan and Zoeller are focused on helping victims of human sex trafficking.

"It can no longer be tolerated that someone can purchase another human being," said Zoeller.