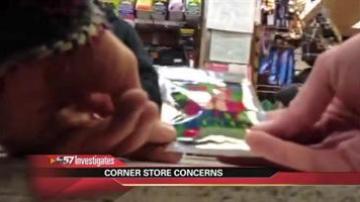 "You either kill people slowly, or you kill them quickly," Karl Nichols of the St. Joseph County Minority Health Coalition, said.

And quickly -- is how some business owners operate. ABC57's Daryl Bjoraas spent weeks gearing up, and going undercover to expose what's become a real problem in Michiana.

Products like iBlown are labeled as potpourri, but it's doubtful it's being used that way.

"People just get real apathetic about it," Nichols said.

He's determined to change those apathetic attitudes. He and other health groups are pushing for tougher regulations of food marts, but it's a fight the group is struggling to win.

"These fines don't equal the amount of money they make from the other activities that go on there," said Nichols.

A kid at the Howard Street Food Mart was selling a $5 bag of what appeared to be synthetic weed, along with polos that don't appear legit, and name brand jeans sold on the cheap.

A side by side comparison shows a few discrepancies. We found differences in the brand's stitching, font, and origin label.

He's lived in his home for more than four decades. Disgusted, he wants Howards Food Mart, and other places like it, to either get it together or leave.

We showed them what they sold us; they outright denied it. Some employees avoided our cameras, and when we pressed the cashier he claimed a language barrier.

Across town at Rick's Gas in Mishawaka, it was a different story.

When we confronted the store owner there, he promised to talk with his business partner, and stop selling the possible pot immediately.

"We have to start with the owners of the stores to step up and become better business owners," Nichols said.

But he knows all too well - promises alone -- aren't enough.

He said without some sort of policy change, these small shops will keep feeding off of the community.