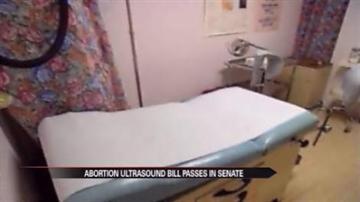 INDIANA -- Indiana is one step closer to a new abortion law that would force women to have an ultrasound before a drug-induced abortion.

The bill has stirred up quite a bit of controversy.

Those in favor say the law would be too invasive because women taking the morning-after pill are in the early stage of pregnancy. That is too early for an abdominal ultrasound.

Some lawmakers are concerned the law could lead women to possibly put their health in jeopardy.

"That's what this bill is about - it's making it just as difficult as possible --- just as intrusive as possible," said Senator Greg Taylor.

"We need to have some regulation -- informed consent, examination in person," said Senator Travis Holdman.

If the bill passes Indiana would become the ninth state to require ultrasounds before abortions.

It now goes to the house for consideration.