Admirers from near and far react to Pontiff's appearance 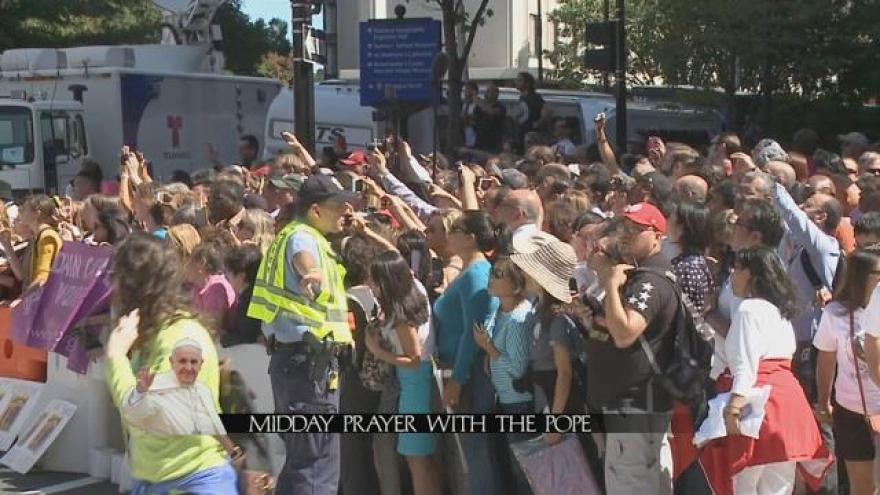 The crowd goes wild and cries fill the air as Pope Francis approaches St. Matthew’s Cathedral in Washington D.C. the pope stopped at the cathedral for his second stop of his first full day in the United States.

On Wednesday Pope Francis performed a midday prayer and addressed about 300 bishops from around the country.

“We are really excited to hear about our bishop and what he heard on the inside,” says Don Roberts, a religious pilgrim from Ohio.

Roberts traveled about seven hours from his home in Columbus, Ohio and says the pilgrimage he has taken with his family will continue to affect his community at home even after all the hype in D.C. fades.

“It’s a great opportunity and for our bishop to be a part of this and the stories he is going to share with us we he gets back to our Parish,” says Roberts.

For locals like Laura Gubisch just seeing the leader of the Catholic Church in her hometown takes emotions to another level.

“The crowd went ‘There he is! there he is!’ and so you just felt your heart surge upward,” says Gubisch.

As Gubisch’s heartbeat rose to high levels, hundreds of cell phones rose even higher and the amount of security was at its highest. Street officers working on crowd control and officials on guard from a building stories above ground level.

Regardless of the extreme safety precautions dotting fans were still able to catch a glimpse.

“We were able to see the back of the Pope as he walked into the Cathedral and a whole ripple went through the crowd,” says Gubisch.