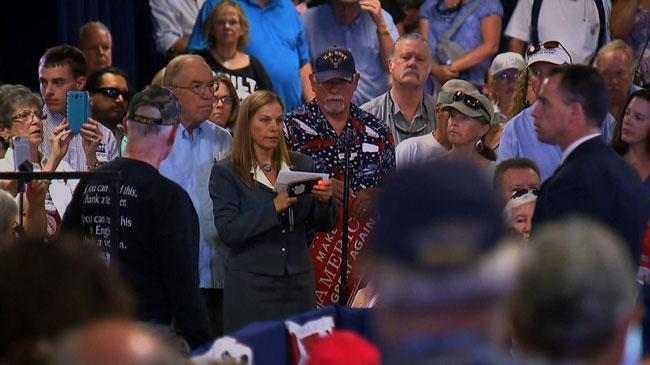 (CNN) -- At a Trump campaign event featuring VP nominee Mike Pence, the mother of an Air Force servicemember was loudly booed when she asked a question that was critical of Donald Trump and his comments about the family of a slain Muslim U.S. soldier.

"My name is Catherine and I'm a military mom. My son is currently serving in the U.S. air force...Time and time again, Trump has disrespected our nation's armed forces and veterans, and his disrespect for Mr. Khan and his family is just an example of that. Will there ever be a point in time when you're able to look at Trump in the eye, and tell him enough is enough?"

As the critical nature of her question became clear, the crowd began to react audibly, booing and shouting as Pence tried to respond. "It's ok, it's ok," he said to the crowd.

The mother continued, "You have a son in the military, how do you tolerate his disrespect?"

Pence then praised Trump for his support for the military.