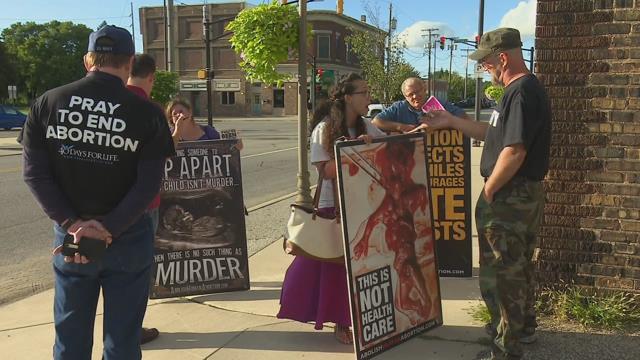 All access to women’s healthcare. That’s what one group was advocating with their All Access Michiana event, and what another was protesting outside.

Both sides wanted to have a conversation about abortion rights. They just have very different stances.

South bend is one of more than 30 other cities nationwide hosting an all access event Saturday.

“The theory behind this kind of event is to publicize that in fact 7 out of 10 voters when polled support access to the full range of reproductive healthcare,” said a Planned Parenthood volunteer April Lidinksy.

The poll she’s citing comes from NARAL Pro-Choice America that was released back in 2014.

That’s why South Bend is participating in this national event Saturday—to try to raise awareness about this disconnect.

“That’s what we’re doing tonight is bringing together a lot of corners of our community in one space throughout the night to have a lot of conversations in a positive context,” said Pro-Choice South Bend Director Liam Morely.

Pro-Choice supporters say abortion healthcare is all about context.

“Abortion healthcare is primary healthcare, so what that means is it’s not elective, it’s not an exceptional procedure. It’s within the context of your everyday healthcare, and we don’t always think of it that way,” said Morely.

“We would say Indiana’s very pro-life, but I think that in all actuality what we’ve done is we’ve decided to regulate how children should be murdered instead of just abolishing it in the first place,” said Jenna Dyer, a pro-life Christian who was protesting outside the event.

So, independent Christians and Franciscan Friars came out to protest and pray at the All Access Michiana event.

“It seems unfair to have those who are unable to make the decision for themselves to have their voice be silenced, so we want to do the best we can to give a voice to the voiceless and to those who do have a voice to give them as much information as possible to make the most informed decision they can,” said Brother Faustino Maria, one of the Franciscan Friars.

At the end of the day, both sides at least seem to agree on one thing.

“Children should come into the world with support,” said April Lidinksy.

“If a baby’s not valuable, then who is?” said Jenna Dyer.

All Access Michiana in South Bend is the only of its kind Indiana. A coalition of pro-choice groups worked hard to get a $5,000 grant to put it together.