Allegations into cockfighting leads to arrest 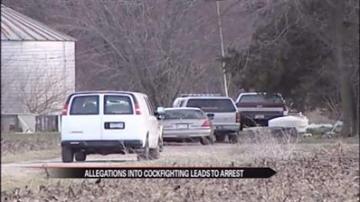 VIGO COUNTY, Ind. -- During a search warrant at a home in Vigo County, local deputies found what they believe was a cockfighting operation.

Officials first served a warrant to the home in Vigo County. That is when they found more than 100 roosters, some pinned in cages.

Officials found signs of deceased poultry and believe it was very clear why the homeowners had the birds.

"Mostly male poultry, roosters, we believe that they show signs that they have been prepared for fighting purposes," said Clark Cottom, Vigo County chief deputy.