AM General announces another round of layoffs 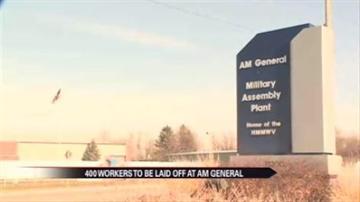 MISHAWAKA, Ind. – A representative with AM General told ABC57 that a changing business environment is to blame for its decision to lay off workers on the Humvee production line.

AM General Spokesman Jeff Adams says it is a “temporary pause.”

Around 400 workers at its military assembly plant in Mishawaka will be laid off until March. They just returned to work in November.

"We have to be agile, lean and make sure that we're able to compete on a global scale. And that's what this new reality is all about and that's what we have been doing,” said Adams.

The company is waiting on large international Humvee orders to come in.

Until then, there's a lull in production.

"When you're dealing on the international side, you've got many different countries that we are talking to with regard to contracts and they have vastly different acquisition rules and regulations,” said Adams.

Employees at the Hideout Lounge, a popular hangout spot just down the road from the plant, didn't want to go on camera, but said they love their jobs, but they are just victims of the poor economy.

Workers will finish up orders for the month of December. The lay-off goes into effect January 1st.

Adams stressed that this is just a temporary production pause. They're not closing the plant.

Other facilities and the south bend headquarters will continue to operate as normal.