AM General is cutting 350 jobs 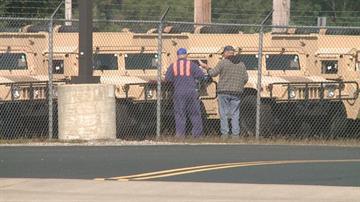 The plant makes Humvees, but the lay-offs come after the need from the U.S. military has dropped.

Charles Hall, President and CEO of AM General said the following in a press release e-mailed to ABC 57:

“AM General’s workforce is the company’s most valuable resource and decisions that adversely affect our employees are the hardest to make. Reducing our production rate was a difficult but necessary choice that will allow us to better respond to the needs to our customers and adjust our business accordingly.”

Some workers told ABC 57 as they left work on Thursday afternoon, they suspected something might be brewing, but they just didn’t know when. "There were kind of some rumors, nothing official,” said employee Jeff Schroeder.

But news like this is always hard to handle whether you’re leaving or staying at your job.

"It's pretty difficult to lose any worker. Everybody is trying to survive, but you know it happens. They've got to do it for a business standpoint and you just survive,” said employee Mike Kauffman.

A spokesperson for AM General told ABC 57 this is going to be a process that starts in late October when the production volume goes down, but you will see movement through the early part of 2012. The spokesperson also said that she is unavailable for interviews at this time.

She added, "AM General will be working closely with our employees to help them prepare for these reductions, ensuring those affected are apprised of their benefits, training and employment transition options."