American Airlines boots family off flight because of their son 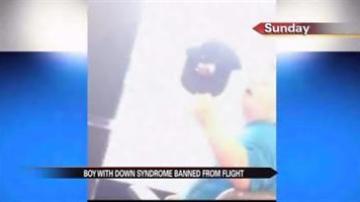 NEWARK -- A California family is taking a major airline on a one-way trip to court.

The family says American Airlines kicked them off a flight because their son has Down Syndrome and the whole thing was caught on tape.

You can see the boy sitting at the gate in a cell phone video playing quietly with a hat.

American Airlines claims the boy was excited and running around and its pilot tried to calm him down but it did not work.

The family says that is simply not true.

The family says they have flown dozens of times but this is the first time they were in first class closer to the cock-pit.

The airline says it made the decision to keep the family off the flight for safety reasons.