An EMT's view from the front lines of America's heroin crisis 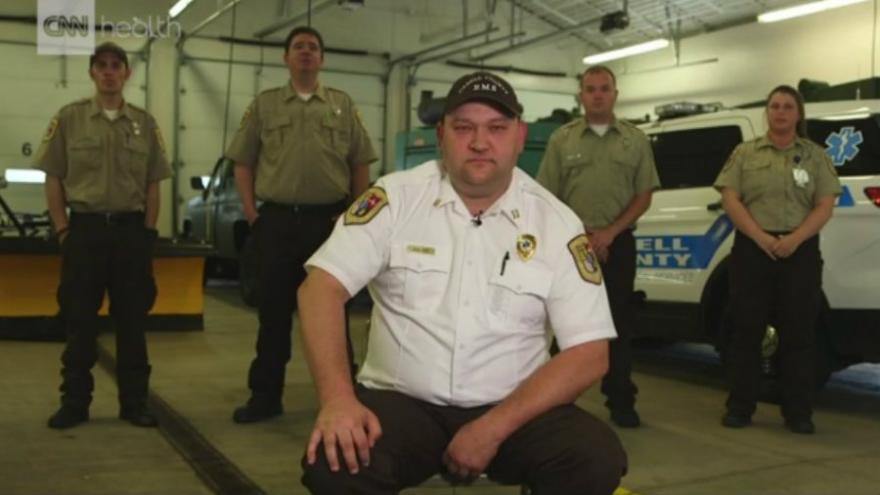 (CNN) -- Driving through the streets of Huntington, West Virginia, with Gordon Merry is a stark reminder of what heroin is doing to American communities.

Merry, director of Cabell-Huntington Emergency Medical Services, points to neighborhoods and homes with razor-sharp recall. He tells a story about responding to a family -- mother, father and son -- overdosing on heroin.

Luckily, as he tells it, another son wasn't using and called 911 after his parents and brother overdosed.

Having spent all of his 63 years in this midsize city tucked into the Appalachian mountains, Merry is still at a loss as to why people turn to the drug that is now, by local health estimates, affecting a quarter of Cabell County's population.

"One overdose is too many. It is unacceptable. The people, I don't know why they do it," he said. "It's destroying a whole generation. We're losin' em."

In Merry's office, you can see the decades of honors and awards he's received as director of county Emergency Medical Services. He has worked with senators, representatives and governors. He has worked alongside the Secret Service for presidential visits and dealt with floodwalls when the Ohio River swelled into the city of Huntington.

But after years of preparing a community for crisis, Merry is now dealing with a challenge that's bigger than most: a crippling heroin epidemic that continues to rage across his town and county. His perspective of the heroin and opioid problems in this part of America is a tragic hometown story and the professional duty of a man tasked to deal with crisis.

The problems here are well-documented. In August, the city's struggle hit a new benchmark when it saw 27 heroin overdoses in the span of four hours.

With a staff of nearly 175, it is Merry and the Cabell-Huntington EMS who stand at the edge of this crisis as first responders, arriving on scene moments after a user has passed out in their home or a gas station bathroom. Sometimes, Merry said, they see the same people multiple times a day.

Beyond the toll it's taken on the community, the hardened psyches of Merry's paramedics and EMTs have also been shaken by the dizzying pace of overdoses. His office started holding monthly support group meetings to deal with the emotional effects of what the EMTs are seeing every day.

"I think, truly, we were struggling with that," Merry said. "And that's why we started to work with local hospitals to try and get them counseling, to deal with these problems."

Beyond Huntington, the opioid problem continues to plague West Virginia, from the panhandle in the north to the southern reaches bordering Kentucky. According to the Centers for Disease Control and Prevention, the rate of opioid overdose deaths here in 2014 was the highest in the nation.

For decades, Huntington was a humming railroad hub. It's also home to Marshall University, the second-largest university in the state, and Saturdays in the fall are defined by football. But since the resurgence of heroin and opioids, Huntington has become a portrait of the problem -- a snapshot of the larger issue plaguing communities across America.

"I don't want people to think this is unique to Huntington," Merry said, "This problem is across the US. I think that we are open about our problem, I think we're aggressively trying to mitigate the problem, but no one knows the answer at this point."

One of the most important tools Merry's team employs is Narcan (the generic version is called naloxone), a drug designed to block the effects of opioids in the brain and bring users who have overdosed back to consciousness. Merry said that for a long time, Narcan sat unused in his ambulances, there only because it was mandated by the government to be in all EMS vehicles.

Now, as the heroin epidemic has grown and the addition of dangerous opioids like fentanyl and carfentanil has made the drug even stronger and more deadly, the need for -- and supply of -- Narcan has grown exponentially.

"It used to be we would buy Narcan, it would expire; we'd throw it away," Merry said. "We didn't have it; we didn't use it." But the modern heroin epidemic changed all that. "It used to be one dose (of Narcan) would revive them. The problem is now, (heroin is) mixed with fentanyl or carfentanil. It's multiple doses, as many as five, six, seven, eight doses to revive someone."

As the drug problem in Huntington takes its toll on community resources, residents hope to reverse the problem. But Merry isn't very optimistic.

"I think we're losing a generation, maybe two generations," he said. "The adults are having children, and the children, unfortunately, don't have much of a chance because of the environment they're growing up in. That's probably the hardest thing to deal with."