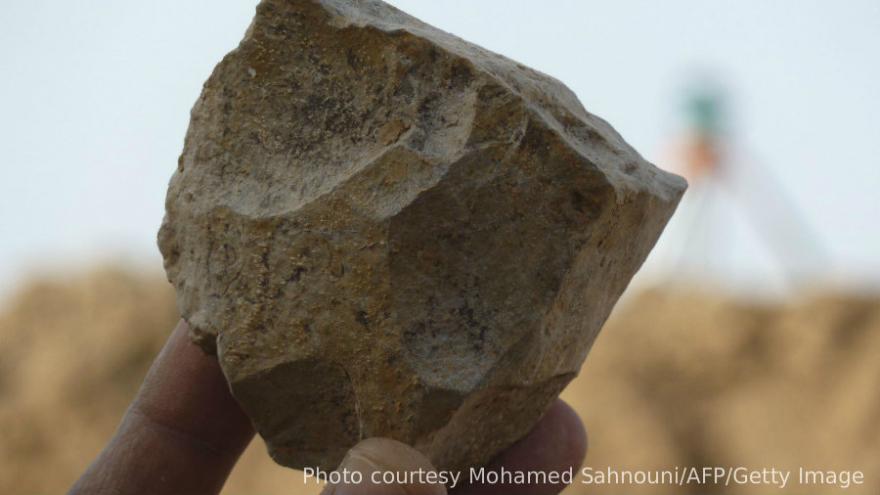 (CNN) -- The story of humankind may need some editing.

A collection of 2.4-million-year-old stone tools has been found in Algeria, throwing into question the long-held theory that humanity emerged in East Africa.

The discovery of the 250 tools, found alongside 296 animal bones, suggests early humans were butchering meat in North Africa about 600,000 years before scientists had thought they arrived in the region.

It was previously believed that early humans, known as hominins, originated and stayed in East Africa for hundreds of millions of years, before beginning to move across the continent.

But the new discovery "shows that our ancestors ventured into all corners of Africa, not just East Africa," Mohamed Sahnouni, who led the project and detailed the findings in the journal Science, said in a statement.

The findings were made at the Ain Boucherit site near the city of Setif, about 200 miles east of Algeria's capital, Algiers.

They resemble similar tools, known as Oldowan, which had previously only been found in the east of the continent, and predate other tools found nearby in the north by at least 600,000 years.

Researchers from Algeria, France, Spain and Australia were involved in the project, which involved 25 years of excavations.

"The effective use of sharp-edged tools at Ain Boucherit suggests that our ancestors were not mere scavengers," says Isabel Cáceres, of Spanish archaeological organization IPHES, who was involved with the project.

"It is not clear at this moment whether they hunted, but the evidence clearly shows that they were successfully competing with carnivores and enjoyed first access to animal carcasses," she adds.

East Africa hasn't yet lost its status as the cradle of humanity -- earlier tools dating back at least 2.6 million years have previously been found in that part of the continent.

But the authors made the tantalizing prediction that even older relics could still be uncovered near the site in Algeria, potentially opening up new avenues in the search for the origin of our species.

"Now that Ain Boucherit has yielded Oldowan archaeology estimated to 2.4 million years ago, Northern Africa and the Sahara may be a repository of further archaeological materials," they write.

"We suggest that hominin fossils and Oldowan artifacts as old as those documented in East Africa could be discovered in North Africa as well," they add.

While no human remains were found at the dig, the tools and animal bones showed strong evidence of human activity.

Some of the bones featured cut marks, indicating an early form of butchery, the authors wrote.

The discovery could indicate a "multiple origin scenario," where humans were making and using tools in different locations across the continent at the same time, they added.

Alternatively, it could mean that a "rapid expansion of stone tool manufacture" took place in the early days of humankind's existence.

Stone tools were found in China earlier this year that dated back 2.12 million years.

The archaeologists behind that project said their finds suggested that early humans moved out from East Africa and into what is now Asia.

The latest findings could tell a similar story, if earlier remains in North Africa are not found. But they would imply that humans were moving west, as well as east, from their birthplace.