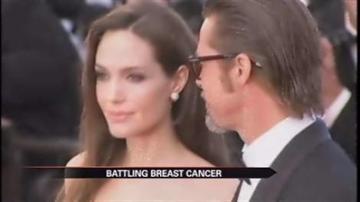 Tuesday, Angelina Jolie even put her face on the issue. Now women across the world and here in South Bend are talking.

As a mother of six and a Hollywood sex symbol Angelina Jolie is one of the last people you would expect to have a double mastectomy. But when she tested positive for the breast cancer gene, she learned she was more likely to get the disease.

Now her outspoken decision is resonating with women and survivors in Michiana.

"It sheds a light on this disease and it shows that people are proactive and it shows that anyone is able to potentially get breast cancer," said Susan G. Komen of Northern Indiana Executive Director Sheri Miller-Story. "BRCA1 and BRCA2 only affect five or 10 percent of the population."

With this test, this small number of women might not have to face the same reality Miller-Story did.

She also had a double mastectomy after being diagnosed with a rare and aggressive form of breast cancer.

"My doctors recommended that I not only have my left breast removed, but also as a preventive measure the right breast and also have a complete radical hysterectomy at the same time," said Miller-Story.

Now, five years since she learned she first had breast cancer, she is cancer free. She says her personal experience helped her realize just how important preventive measures, like genetic testing, truly are.

"You really have to be your own advocate. I went to a group of doctors who I didn't feel were proceeding with the right treatment, so I sought out another group of doctors and I found the right group to help me and what I needed," said Miller-Story.

"Being proactive about her health care is good for her. I think women need to make that decision on an individual basis," said Miller-Story. "Maybe what she did isn't the right decision for everyone."

Story said she also had genetic testing done. She learned later, after her diagnosis, that she had a false negative.

It's for that reason that her DNA is now being used by researchers to help identify other possible gene mutations.

This is such an important issue that affects so many women. We encourage you to come join ABC 57 at the Susan G. Komen Race for the Cure on June 15th at Potawatomi Park.

There is still plenty of time to register and walk for someone you know affected by breast cancer. To register, click here.