Animal Controls steps up efforts to check on outdoor pets 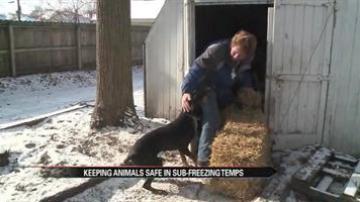 SOUTH BEND, Ind. -- Because of the cold weather, South Bend Animal Control has increased patrols to look for animals who may be without proper shelter or warmth. They have also received an increase in calls from people worried about animals left out in the cold.

Trenevia Ivory's dog likes to be outside.

"She likes to be out here in the snow, she's a snow dog," said Ivory.

An Animal Control officer brings Shelbia hay to keep her warm in her shed.

"She's more like a protector dog so she'd rather be outside," said Ivory.

"I come out here and check on her. And see if she wants to come in for a while if it gets too freezing cold out here," said Deandre Franklin.

"We called Animal Control and they been giving us free hay for a year now," said Ivory.

With these cold temperatures animals are at risk for getting frost bite.

"If they want to come back in immediately let them back in because the temperatures are just way too cold on their paws," said Matt Harmon, manager of South Bend Animal Care and Control.

A local farmer donated ten bundles of straw to the shelter so that animal control officers can take it to animals stuck out in the cold.

"A lot of times those dogs are chained up to the dog kennel, an enclosed kennel, so we keep a particular eye on those because they don't have a particular place to hide during the cold," said Harmon.

Harmon says it is better to use straw to insulate pet beds than pillows or blankets.