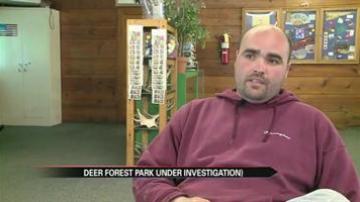 Jon Stolarz says he and his wife Amy Gadberry now run the park as a non-profit-under the name Deer Forest Exotic Animal Sanctuary.

Stolarz says he is not connected to the USDA's investigation.

He said the land owner, John Modica, was under investigation for malnourishment and mistreatment of animals last year when the park went by the name of Deer Forest Amusement Park.

Today, Deer Forest is a shadow of its former self. Locals say in its heyday, it bustled with people and animals.

Stolarz says he wants to bring that feeling back.

"It's very close financially to shutting its doors, and us being here gave it a breath of fresh air, so we ask that people embrace that instead of kind of faulting us before we ever get started," said Stolarz.

Stolarz says he took over managing the park in May of last year-and has been working to turn it around ever since.

Since leasing the property in March of this year, he says he and his wife Amy are currently working to obtain an operating license from the USDA-but they say it hasn't been easy.

"The process would have been much easier had John Modica not left us with such a headache as far as poor animal care," said Stolarz.

Stolarz says the application is being held up because the USDA wants to be sure Modica will have nothing to do with the animals.

"USDA is concerned going forward, who ultimately is responsible for the animals and what's going to happen. It presents a very sticky situation for them that John Modica still currently owns the property and Deer Forest Exotic Animal Sanctuary only leases it," said Stolarz.

But Stolarz wants to assure the community he's not here to cause problems.

The USDA confirmed Stolarz and Gadberry are in the application process for an operating license and that request has not yet been granted.

The agency refuses to say who or what-specifically they are investigating.

A search through the IRS database for tax exempt organizations did not list Deer Forest Exotic Animal Sanctuary.