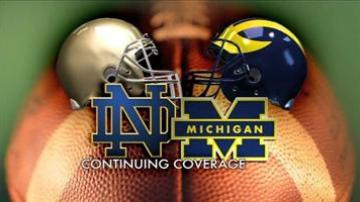 ANN ARBOR, Mich. – Fans have arrived. The teams have prepared, and on Friday everyone’s trying to patiently wait for Notre Dame and Michigan to face off.

As the final hours close in before Saturday’s game, the University of Michigan’s campus picked up steam, and the same is expected in the Big House.

“It’s going to be rowdy there tomorrow I can guarantee that, so it’ll be a challenge for both teams to hear, especially Notre Dame because it’s going to get quite loud,” said Michigan student Jeff Pheifer.

While the Fighting Irish are known for their traditions, Pheifer said Michigan Stadium is the Wolverine’s biggest trademark.

“I think the thing that stands out is our stadium. It’s the largest stadium in the United States that in and of itself is one thing we’re proud of, and I think the rich tradition of having a solid football team. We’re similar to Notre Dame in the fact that we’ve consistently put out a good product and a good team so I think that weighs heavy with students here,” said Pheifer.

Both Notre Dame and Michigan fans told ABC 57 they planned on tailgating early and late for the rivalry game.

The ones that call Ann Arbor home are of course predicting a win at their house on Saturday.