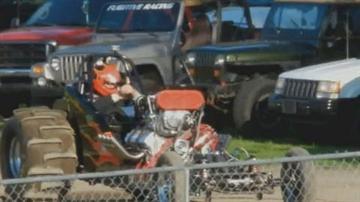 DeLeeuw, 48, from West Olive, Michigan, was at the Sod Buster Mud Bog Saturday night to run the sand dragster built on the 100 foot mud bog track.

The mud was supposed to slow the racers down, but the first racer on the track skipped across it like a stone on a still pond.

In less than 2 seconds, DeLeeuw rocketed down the 100-foot track, but lost control and could not stop in time.

His dragster rolled and ended up upside down on top of concrete barriers and a chain link fence.

DeLeeuw was declared dead after being removed from the track.

Today the destroyed chain link fence and the track, with deep ruts drying in the sun, were left behind.

An eyewitness to the crash, Kenneth Jackson, recalled the scene. “He came down through there so fast, it was almost like it launched, and he just kept coming and getting faster and faster,” said Jackson.

As of Sunday night the police were still investigating the accident trying to determine if it was caused by a mechanical failure or through driver error.