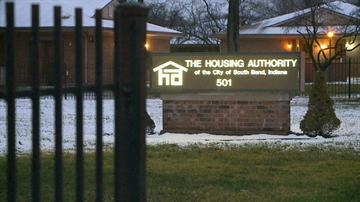 SOUTH BEND, Ind. – Another woman has come forward claiming to have been sexually harassed while working at the South Bend Housing Authority.  Terri Kennedy said she worked at the authority from 2006 to 2009.  She claimed multiple current employees called her after seeing ABC57’s coverage of other harassment accusations and they asked her to tell her story.  She claimed to have been harassed by a manager at the authority.

“It was in a couple of forms, one was of the sexual nature where somebody was telling inappropriate jokes and followed me around an entire day and it was a management person,” Kennedy explained.  “Another part of it was the same person had a tendency to come to my cubicle and interrupt me during my work day.”

Kennedy claimed the man repeated his behavior after she told him to stop.  Her boss, who had overheard her tell him to stop, reported his behavior to higher-ups in the office.  But, Kennedy said, the man was close friends with Executive Director Marva Leonard-Dent, whose also been accused of sexual harassment.  Kennedy claimed the man received no formal punishment and was simply told to stop by managers.

“He was the one who had his hand slapped, he got called to the carpet for actually saying something to me and he didn’t like that,” she explained.
She said that the man was in charge of writing grants which allowed her to keep her job working with senior citizen programs for the housing authority.
She said she believes he, along with managers like Leonard-Dent, purposefully decided to deny the grants and eliminated her job in response to her accusations.

“He would put employment postings on my desk and he was the person who had actually written the grant to continue my program,” she explained, saying that the man had taunted her.

Kennedy claimed the problems with management at the housing authority go far beyond mishandling of sexual harassment claims.

“The best way that I can put it is that there is so much mismanagement and inappropriate management going on there, it’s very sad,” she described.

She claimed managers often spend time not working while being paid.  That there was misuse of benefits offered to management and that she agrees with calls by other accusers for Marva Leonard-Dent to be removed from her position as executive director.

She said she’s still in contact with current employees at the housing authority who say abuse is still happening.

“The things that happened to me are not just limited to me,” she said.  “There are other people who have gone through some crazy things with HR (human resources) and the policies and procedures that seem to change and not make sense.”

She explained that she decided to come forward after hearing about the other accusations and after being urged by current employees to tell her story.

“There are too many people that are not coming forward or at least giving some information,” she explained.  “There has to be something there, there isn’t just smoke, there’s actually fire.”

Officials with the South Bend Human Rights Commission said all allegations of sexual harassment against South Bend Housing Authority would be handled by the Equal Employment Opportunity Commission (EEOC) as the city would not investigate allegations against another city department.  The EEOC wouldn’t comment on any previous or current harassment claims at the housing authority.  But, if employees do wish to report any incidents the EEOC invites them to report it to them.

“If someone is being harassed or otherwise believes that are being discriminated against, they should first contact their HR office and work through internal channels to try to resolve things,” explained Christine Nazer, a spokesperson for the EEOC.  “If this isn't feasible, or if efforts are unsuccessful, they should find their local EEOC office and file a charge of workplace discrimination.”

Any employees fearing for their jobs should still come forward, Nazer said.

“Employers are prohibited by law from retaliating against employees for reporting/complaining about harassment or discrimination. Once an employee files a charge with the EEOC, the employer is notified, so the employee would be smart to let the EEOC know if they are treated adversely after filing a charge,” Nazer explained.  “The decision to come forward can be difficult, but if we do find merit to the charge, employees are protected by law.”

ABC57 also attempted to contact South Bend Mayor-Elect Pete Buttigieg to see if he was aware of the allegations and planned on taking any action when he takes office on January 1st.

“We are gathering facts on this issue and we will handle it after the first of the year,” answered Mike Schmuhl, a spokesperson for Buttigieg.

Terri Kennedy said she has been in contact with lawyers for other accusers who plan on filing a lawsuit regarding their sexual harassment claims, she is considering joining their suit.