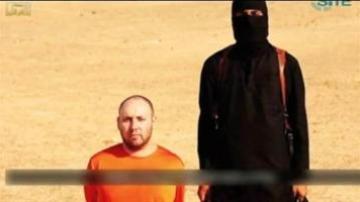 WASHINGTON D.C. – Reports are in that another American journalist may have been executed by the Islamic terror group ISIS.

A video posted online Tuesday appears to show 31-year-old freelance journalist Steven Sotloff, who was captured in Syria a year ago, calmly addressing the camera saying, "Obama, your foreign policy of intervention in Iraq was supposed to be for preservation of American lives and interests, so why is it that I am paying the price of your interference with my life."

In that video, militants threatened Sotloff would be next.

Just last week, his mother, made a failed video plea to the terrorists asking for them to “please release my child. As a mother, I ask your justice to be merciful and not punish my son for matters he has no control over.”

In the still un-authenticated execution video, a militant holding a knife at his side says he is "back" in response to U.S. air strikes in Iraq, threatening to claim more lives.

This comes as President Obama makes his way to Europe in part to talk with NATO allies about taking action against ISIS.

The White House spokesperson speaking today on the president’s behalf extended sympathy and said extensive efforts were made to rescue Sotloff.

“Our thoughts and prayers first and foremost are with Mr. Sotloff and Mr. Sotloff's family and those who worked with him,” says White House Press Secretary Josh Earnest.

There are reports that at least two other American journalists are being held captive by ISIS.