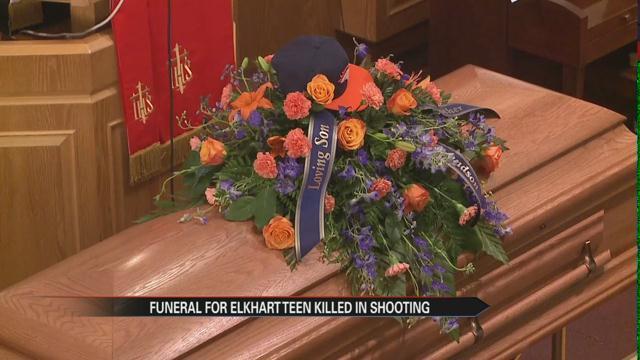 Family, friends and prayers filled Greater Bethlehem Baptist Church on Friday April 24th, all in honor of a life lost too soon.

“He was a normal kid to us so to have that taken from us its really going to take my family a long time to rebuild,” says Shere Robinson.

Robinson is the cousin of DezJuan Sanders, the 14-year-old who was shot and killed in Elkhart on April 14th. Robinson says her cousin's death is part of a vicious epidemic.

“This is what plagues our community, young men with fatherless homes,” says Robinson.

Pastors like Marvin Pace preached throughout the ceremony and echoed Robinson's words.

“They probably feel a disconnect that people my age cannot relate, even connect to what they are going through,” says Pace.

Pace is a part of the Interdenominational Ministerial Alliance. Also known as the IMA, a group of pastors reaching out to youth in Elkhart and trying to give them the type of neighborhoods they remember growing up in here in Elkhart.

Friday, the IMA made a commitment to the community to bridge that gap between youth in Elkhart and older mentors.

“You are going to see many pastors and ministers and community leaders become active in the community because we do not want this to spiral down into escalating violence,” says Reverend McNeal Stewart III.

Reverend Stewart says the IMA has started initiatives in different neighborhoods, including places like Washington Gardens. They will begin mentoring and sports programs, hoping to give Elkhart youth a chance to escape the violence.

“We had a lot of sports growing up. We had a lot more activities that helped us release a lot of anger and the generations now, don't have a lot of outlet. And the things they used to have they don't have anymore,” explains Pastor Pace.

As DezJuan's family spoke during the funeral they agree it's time to do something.