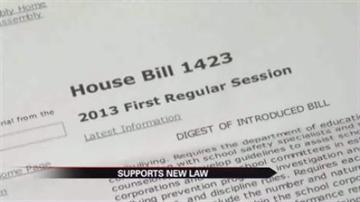 Sixteen-year-old Chelsea Little told the legislative committee how she was shoved into lockers and bathroom stalls while attending middle and high school.

She said it got so bad at one point she tried to commit suicide.

Now she is sharing that ordeal in support of the new anti bullying law which will give support services to victims like Little.

"I finally can be a voice for the kids that have committed suicide because I have actually had three of my friends commit suicide due to bullying, and it needs to stop," said Little.

It now heads to the state house.

Another bill, House Bill 1015, would give schools the ability to discipline students for things like cyber bullying that happen off campus. That passed by a narrow five to four vote.