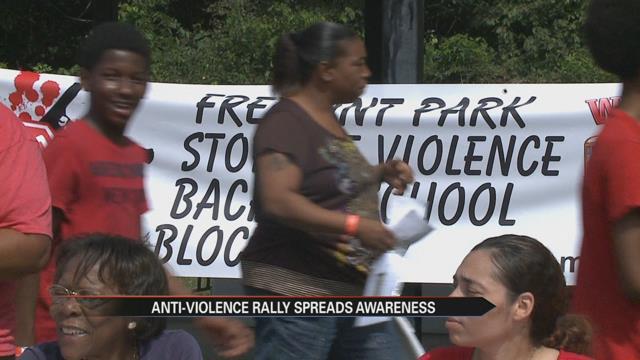 Organizers say the idea behind this event came after they realized gun violence in their community was on the rise, putting their families in danger.

Last summer, Andre Davis was walking down a street, joking around with a friend, near Fremont Park when a little boy saw them and broke down.

Davis says the boy thought something bad was going to happen to him.

“Because there had been problems here before,” said Davis.

After realizing that this little boy had begun to lose trust in his own community, Davis had seen enough.

“It’s a bigger message that we’re giving out, stop the violence,” said Davis.

Davisis one of several organizers who put together the free event at Fremont Park.

For Lisa Chavers, who says she is a mother figure to many in the community,the message is a strong one.

Chavers says she has lived in the area for over 20 years and refuses to hear about anymore gun violence in her community especially about those she’s raised.

“Stop the violence. We are not taking anything else other than stop, bottom line,” said Chavers.