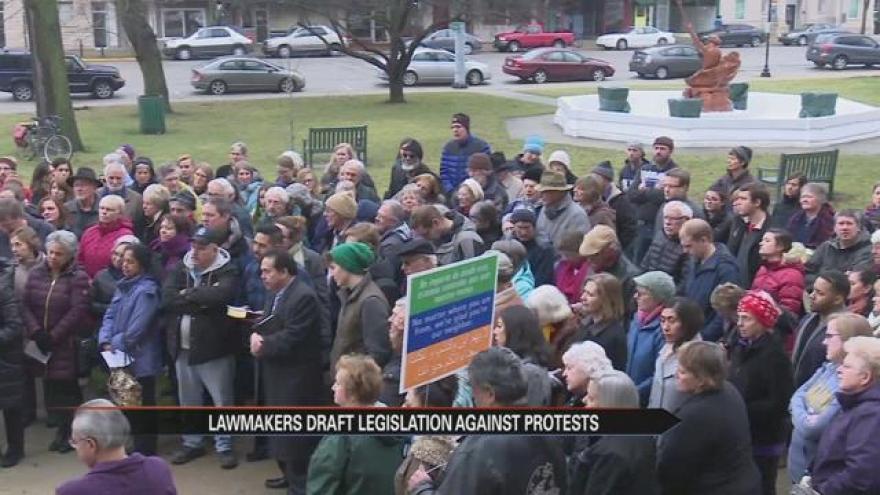 Many protests have been going on Friday, as President Donald Trump was officially sworn in. But newly drafted legislation in Indiana, could limit how people protest.

Friday afternoon in Goshen, prayers for a future of unity and tolerance.

"Peaceful with a little bit of urgency," says Reverend McNeal Stewart of the Canaan Baptist Church in Elkhart. "Martin Luther King spoke about the urgency of the now. This is a moment in our history where people need to hear from the voices in the community.

Senator Jim Tomes, who represents the 49th district, introduced a bill that would allow police to be dispatched 15 minutes after protestors gather in the streets, and us "any means necessary to clear them."

"That is against the fabric of America and I would fight that with every pore of my being," adds Reverend Stewart.

In a statement to ABC57, Republican Sen. Tomes say, in part:

"The object of the measure is very simple. We need to keep our streets and interstates open to commerce, traffic, motorists, and emergency personnel.

But this worries many.

"How do you define, 'by any means necessary?' asks Richard Aguirre, an administrator at Goshen College. "Does that mean deadly force would be used? I guess that could justify someone being killed because they're blocking the road."

Indiana isn't the only state with anti-protest legislation.  Five states, including Michigan, have similar proposals.

Representative Gary Glenn's office released a statement to ABC57, saying that in current legislation, "person or persons cannot obstruct or interfere with the entrance of a place of employment, or with the free use of public roads, railways, airports, or other means of travel."

Their current law is against mass picketing, and violations are considered a misdemeanor.

But a newly proposed bill by Rep. Glenn could fine violators $1,000, in order to enforce the current law.

Although it was not passed in this past legislative season, Rep. Glenn's office says they do plan on reintroducing it.

Back in Indiana, Hoosiers hope neither of these bills go through.

"If you're willing to be arrested for your beliefs, that's part of what social justice and protest is all about," says Aguirre.

And what they feel, America is all about.