Apple and Epic wrap up first week of their blockbuster trial. Here's what happened and what's next 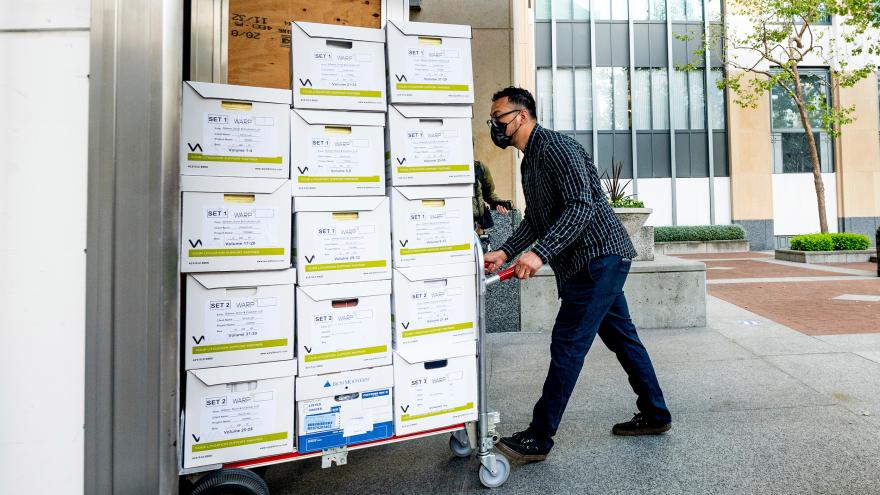 Apple, the maker of the iPhone, and Epic Games, the maker of Fortnite, wrapped up the first week of testimony on Friday, with the iPhone inventor trying to fend off accusations from the video game developer that its App Store constitutes a monopoly and that it has engaged in anti-competitive behavior. Photo: Noah Berger/AP
Originally Published: 09 MAY 21 09:36 ET
By Rishi Iyengar, CNN Business

(CNN) -- Is Fortnite a game? An app? An expansive virtual universe? All of the above?

Is an iPhone just another gaming device, or a tightly controlled ecosystem? And is it really as secure as it is reputed to be?

These are just some of the many questions that have come up so far and been debated in what could be one of the most consequential trials for the modern-day tech industry.

Apple, the maker of the iPhone, and Epic Games, the maker of Fortnite, wrapped up the first week of testimony on Friday, with the iPhone inventor trying to fend off accusations from the video game developer that its App Store constitutes a monopoly and that it has engaged in anti-competitive behavior.

At the heart of the trial is Apple's payment system, which must be used for any in-app purchases and gives Apple a 30% cut of any such transactions. In August last year, Epic attempted to circumvent the system, resulting in Fortnite's removal from the App Store, followed by a lawsuit and, now, the ongoing trial.

What is a game?

On the stand, Epic CEO Tim Sweeney repeatedly sought to define Fortnite as more than just a game, using the word "metaverse" multiple times to refer to a virtual world where people, through their online avatars, attend concerts, watch movies and go to parties. Other game-driven virtual worlds such as Minecraft and Roblox — both of which are still available on Apple's App Store — also came up repeatedly.

Epic is trying to buttress its argument that people do a lot more in Fortnite than just play games, and that Apple's 30% take on transactions within Fortnite's iOS app are anti-competitive since alternative systems aren't allowed.

Presenting Fortnite as more than a game is an attempt to expand the scope of the case and show how onerous Apple's restrictions are, according to Ari Lightman, a professor of digital media at Carnegie Mellon University.

"If you download the app from the [App Store] and then you do in-app purchases, a certain percentage comes back to Apple, part of its agreement," he said. "But if you want other additional things, if you want digital experiences, virtual experiences that doesn't relate to the gaming but relates to the brand, does Apple still get a part of that? Should they get a part of that? And Epic's arguing: no."

While Epic is trying to broaden its scope, Apple — which accounts for more than a billion devices worldwide — is trying to diminish its own. The iPhone and iPad are simply two of the many devices on which Fortnite can be played, the company argues, among others that include the Sony Playstation, Microsoft Xbox, Nintendo Switch and even smartphones using Apple's main competitor, Google's Android system.

Apple claims many of those platforms are far more restrictive than its own — Sony, for example, rarely allows play against gamers on other devices and doesn't permit outside payment systems. Game consoles also charge 30% commissions.

Epic countered that argument by saying consoles are fundamentally different from iPhones, since they are used for a specific purpose -- gaming only -- and called Microsoft Xbox executive Lori Wright to the stand to help make that point.

"We certainly don't view the iPhone as a competing device" in the same way as a Playstation, Wright said in response to questions from Epic's lawyer.

It's all about the market

The fight to define games and gaming devices is a proxy for a much bigger battle.

Epic's case hinges on defining Apple as a market unto itself. It is attempting to show that the company exercises complete control of its own ecosystem, where app makers must play by its rules if they want access to the hundreds of millions of Apple users and devices.

And Apple, of course, needs to convince U.S. District Judge Yvonne Gonzalez Rogers that there are numerous competitors users can choose from if they don't like how it operates.

"While courts are reluctant to define single-brand markets, it seems appropriate to do so here," said Mark Lemley, director of Stanford University's program in law, science and technology. "If you own an iPhone, you can only buy apps through the Apple App Store... People aren't going to switch phone ecosystems based on the availability of a single app."

Epic also faces the challenge of proving that Apple's payment requirements are anti-competitive. Apple has countered that the commissions are necessary to help pay for its frequently touted privacy and security features.

Epic sought to throw cold water on that argument in the second half of the week, by extensively questioning two Apple executives — App Store VP Matt Fischer and app review director Trystan Kosmynka — on the company's process for adding apps to the company's devices. Epic's lawyers showed several pages of internal Apple emails that revealed fraudulent, malicious and copycat apps that made it through the review process.

While both executives conceded that the app approval process isn't foolproof, they defended Apple's current system and practices.

Fischer said the company felt "justified that we earn our commission" on digital transactions.

"I think the number of mistakes are a small fraction of the effectiveness of the overall review process," Kosmynka added.

So far, testimony has come from Sweeney and several other Epic Games executives, two Apple executives and one representative each for Microsoft and computer systems maker Nvidia, as well as the maker of a yoga app called Down Dog, who testified about Apple's App Store policies and restrictions.

The court proceedings will resume Monday, with Epic continuing to build its case before Apple is expected to take over later in the week. Several senior Apple executives are expected to testify, including CEO Tim Cook and senior vice president of software engineering Craig Federighi.

The trial is expected to run until May 24, so it could be weeks until a verdict is reached — and appeals are likely to follow.

Whatever the result, the case is bound to mark a big shift on several fronts, including the broader app ecosystem worth tens of billions of dollars and tech regulation in general.

"I think Apple has more to lose here because it has a very lucrative business model at stake," said Lemley, of Stanford, though he points out that Epic — valued at nearly $29 billion — also has a lot of money on the table. The company has a pending lawsuit against Google over its Android app store and could open itself up to a battle with console makers over their own restrictions.

"More generally, the public stands to benefit from an Epic win, both because it would mean that Apple would find it much harder to exclude apps it competes with and because it will reduce the cost of entry for new apps," Lemley added.

Lightman, of Carnegie Mellon, echoed that Apple has more on the line.