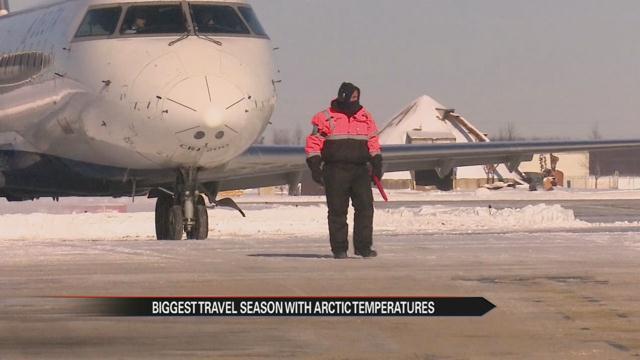 It's that time of year again, the biggest travel season. And this year, there are record breaking numbers of people planning to go away for the holidays. But this arctic air may be a little bump on the road, or runway, for travelers.

It comes every year: snow, ice, and bitter cold. For employees at South Bend's International Airport, it's routine.

"Our maintenance crew is tremendous in these types of weather events," says Julie Curtis, Director of Marketing and Communications for the airport. "Winter weather happens every year here in Northwestern Indiana. So we're very prepared for it."

They get ready early on, at the sight of the first snowflake.  Workers make sure to keep the runways and taxiways clear, enabling aircraft to come and go.

It takes a lot of work to keep the airport up and running.  A variety of tactics are used to keep it safe for travelers.

"They need to be out there during active snow. And then after it snows, if there's any blowing or drifting, they're out there continually," adds Curtis.

Their hard work, pays off.  The arctic air blast didn't ground any planes at the South Bend International Airport.  Although there were a few delays Monday afternoon, it wasn't South Bend's fault.

Regardless of weather, Curtis says its important for travelers, no matter the weather, check their flight status before heading to the airport.

But airplanes weren't the only mode of transportation affected by the bitter cold, snow, and ice.

Passengers on the South Shore Line were bussed in between the South Bend and Michigan City stations.

ABC57 was unable to receive a comment, but the train's Twitter page listed several delays, each lasting more than half an hour.

It was a long day for train travelers, with delays and waiting for busses.

"I was waiting for the train for about 30 minutes," says Lily Victoria. "It should have been there at 9:30, but it got there at 10 in the morning."

It pushed back some people's plans, and important commitments.

"I was definitely later to work than expected," says Audi Didiomenico.

And now as the countdown to the holidays begin, people will want to get to their destinations on time.

"It'll definitely delay people's plans," adds Didiomenico. I mean traveling by bus, trains, flights, things get delayed all the time over the holidays."

"I was very surprised, I thought they had this together," says Victoria. "[That they] were prepared for people traveling."

Victoria added that she was happy she was bundled up for her wait, and urges others to be prepared just in case there's a delay.